I’m going to kick off today’s post with a little personal news!! 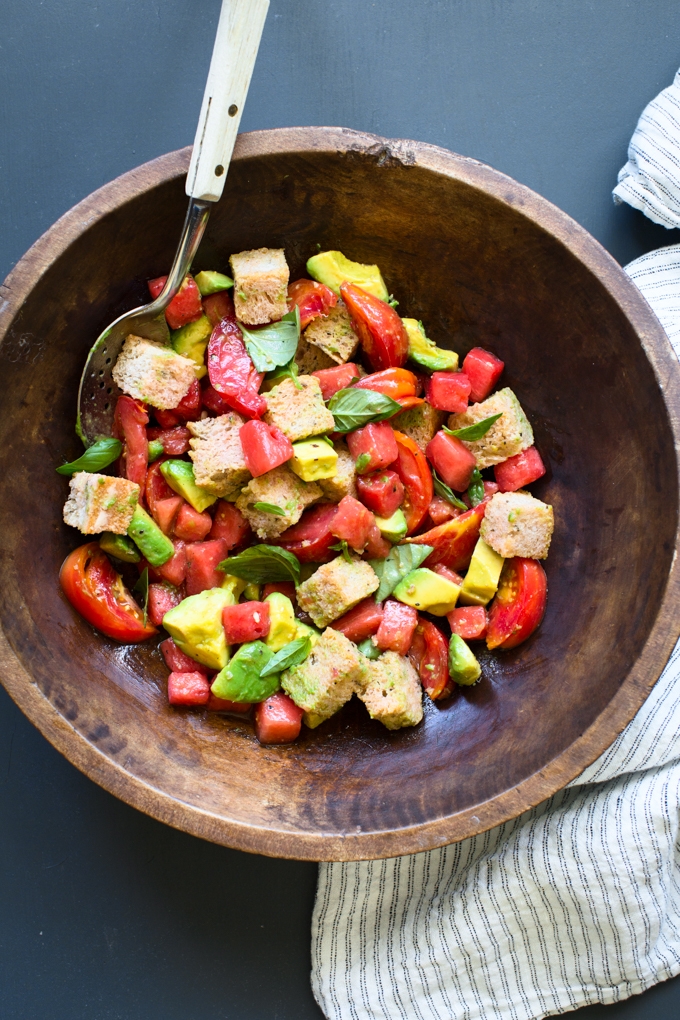 For the past couple of weeks, I’ve been consumed with developing 25 new breakfast recipes for a local San Diego health and wellness group, The 30 Clean!  I’ll be spending the rest of August photographing and putting together a full eBook.  More details to come once it’s done!  If you’d like a first look at some of these recipes, be sure to check in with me on Instagram where I’m documenting my testing using the new Instagram Stories feature.

Speaking of IG Stories, what do you guys think of them?  Do you like using the function?  Or just viewing Stories?  So far, I’ve really been loving them!  When it comes to social media, I spend most of my time on Instagram, and I really like that I can now share quick clips of my day-to-day.  Jorge and I are always checking out new restaurants around San Diego, and many of those experiences don’t make it to my IG feed.  With Stories, I feel like I can quickly share these visits without worrying about the perfect lighting or plating or whatever.  They’re fun and they’re casual.  So if you’re interested in following along, be sure to find me on Instagram: @brandiego.

Now, let’s get to the recipe. 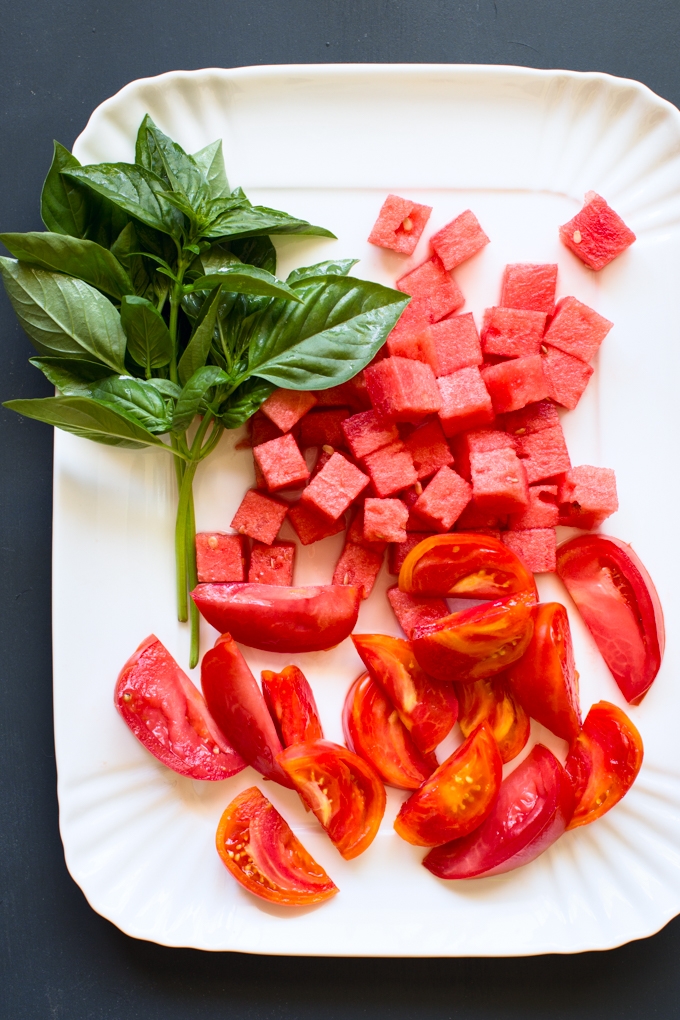 Jorge and I recently had a fab dinner at the new Cucina Sorella in Kensington, and one dish I was particularly blown away by was their Watermelon and Tomato Panzanella.  The tomatoes were ripe and supple, and the watermelon was impossibly juicy.  The croutons were also soft outside and crunchy within.  Luckily, the Chef gave me some clues on how he prepared the dish. 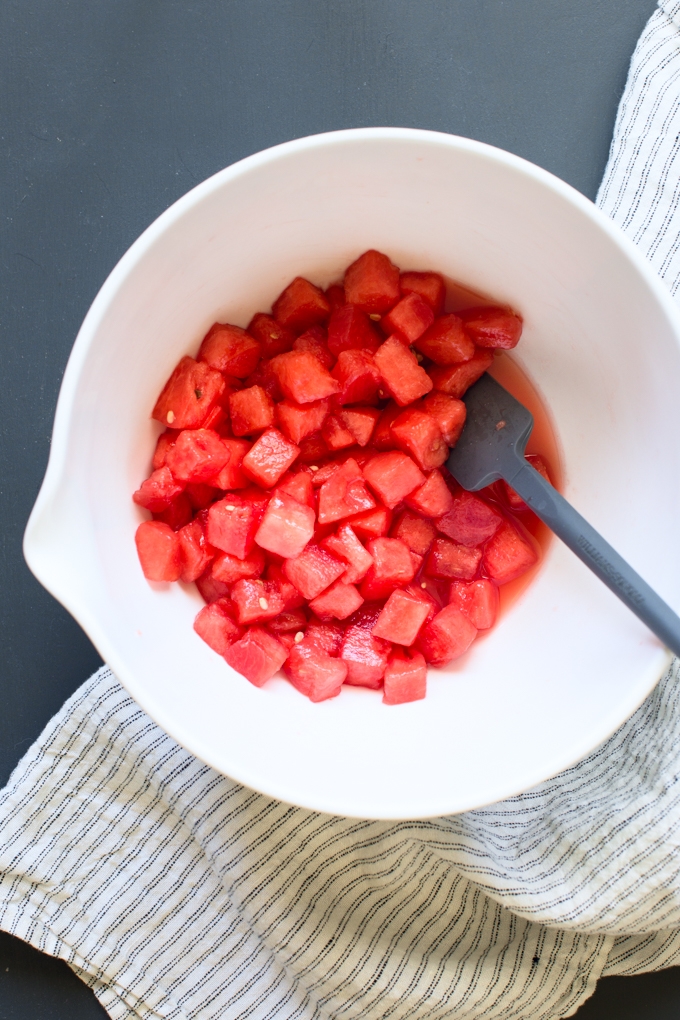 The secret to those perfectly juicy cubes of watermelon?  Maceration.  First, start with a deliciously ripe summer watermelon.  Next, cut it into small cubes and toss with white balsamic vinegar, lemon juice, salt and sugar.  Let sit for 20 – 30 minutes, and the watermelon transforms into a sweeter, tangier version of itself.  The flavorful juices that pool below are also used to dress the crunchy croutons (more about that next). 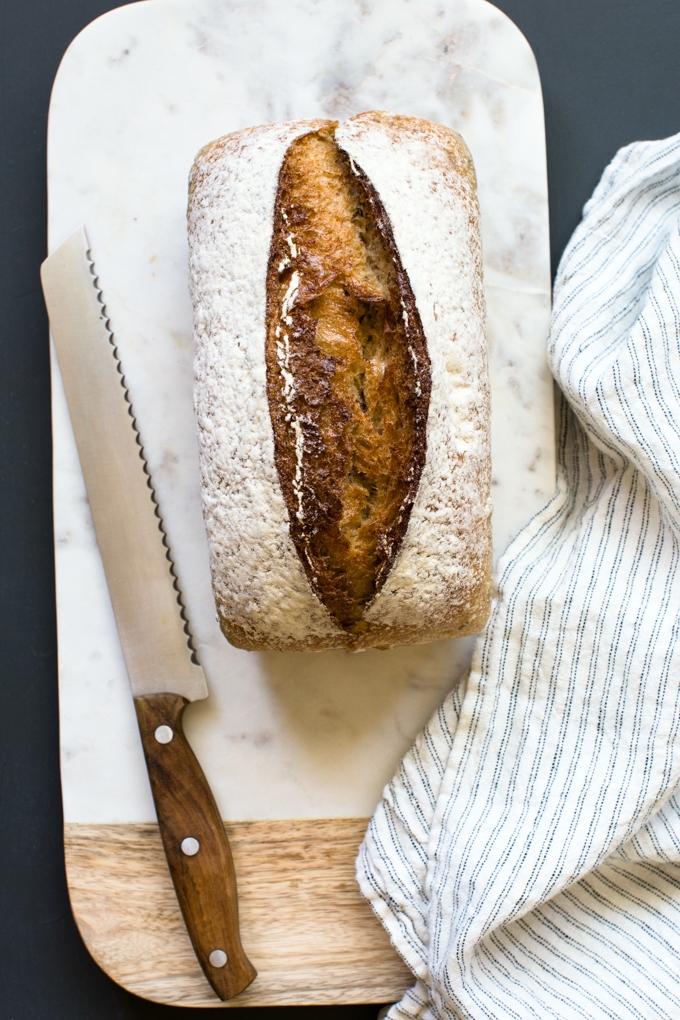 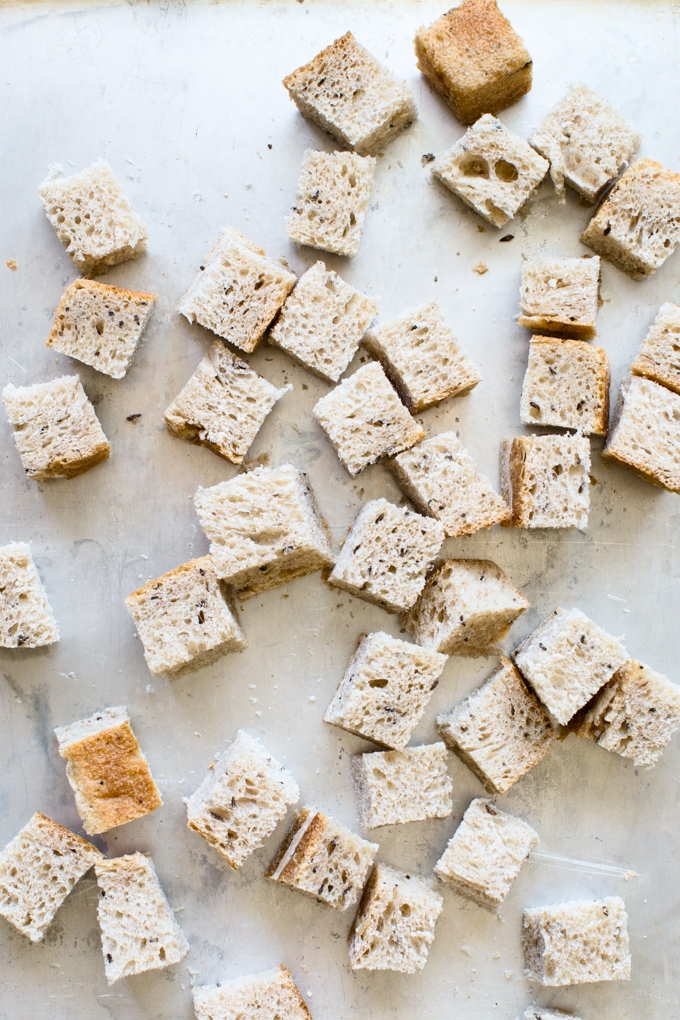 The Chef also mentioned that he used good, Jewish rye bread in his panzanella recipe, so I am doing the same here.  Dense cubes of rye bread are baked in the oven until crunchy throughout.  The cubes are then tossed in some of the watermelon juice right before serving.  The outside of the croutons turn tender and flavorful while the inside holds on to some good crunch.

These steps may seem a little involved for just a salad recipe, but I promise you that this will be one of the best panzanella’s you’ve ever tasted.  The ingredient list is pretty simple too.  Just keep in mind: 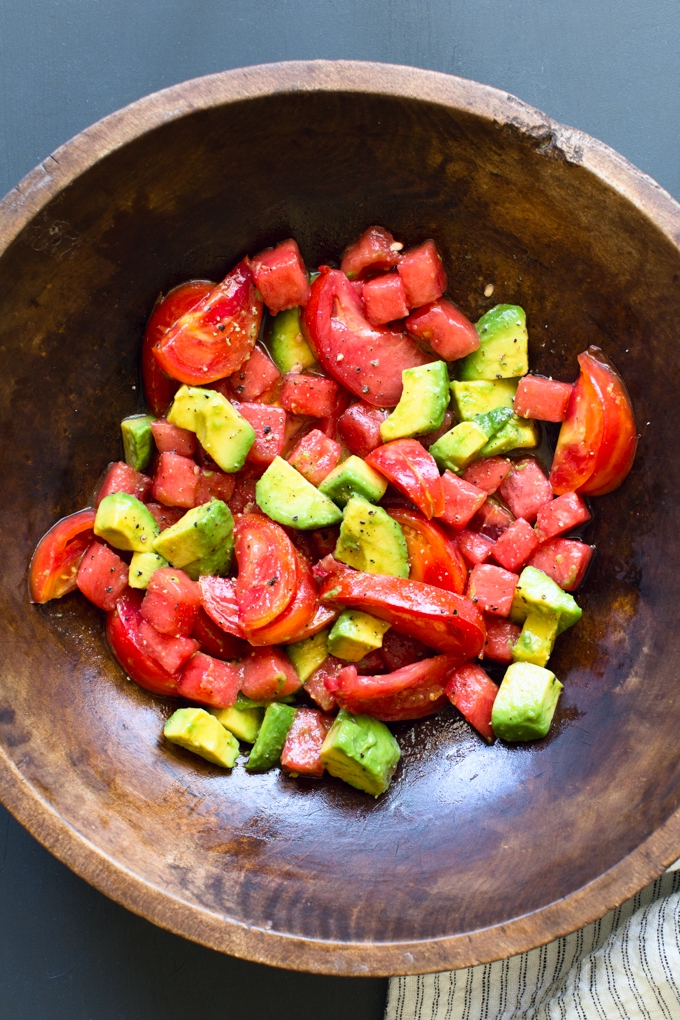 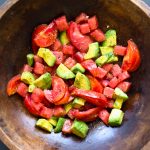 Here are some other watermelon and/or tomato recipes on Kitchen Konfidence: 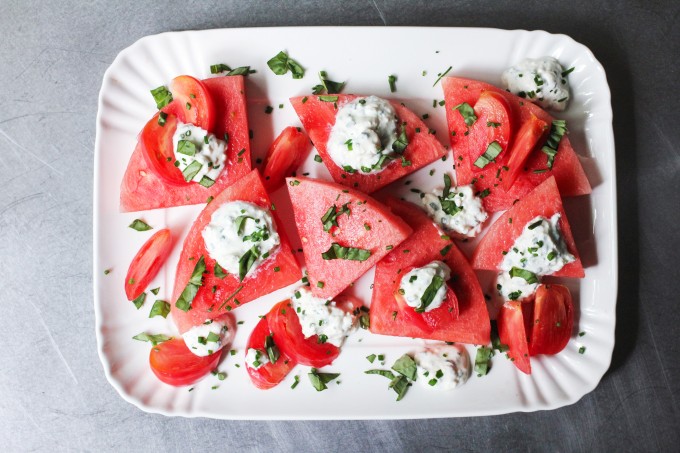 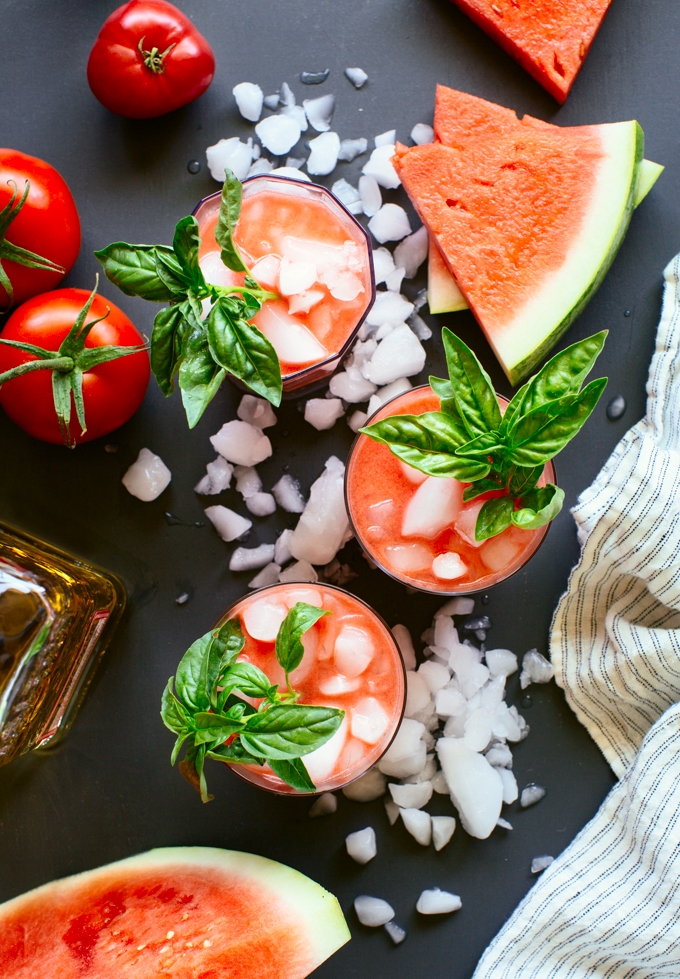 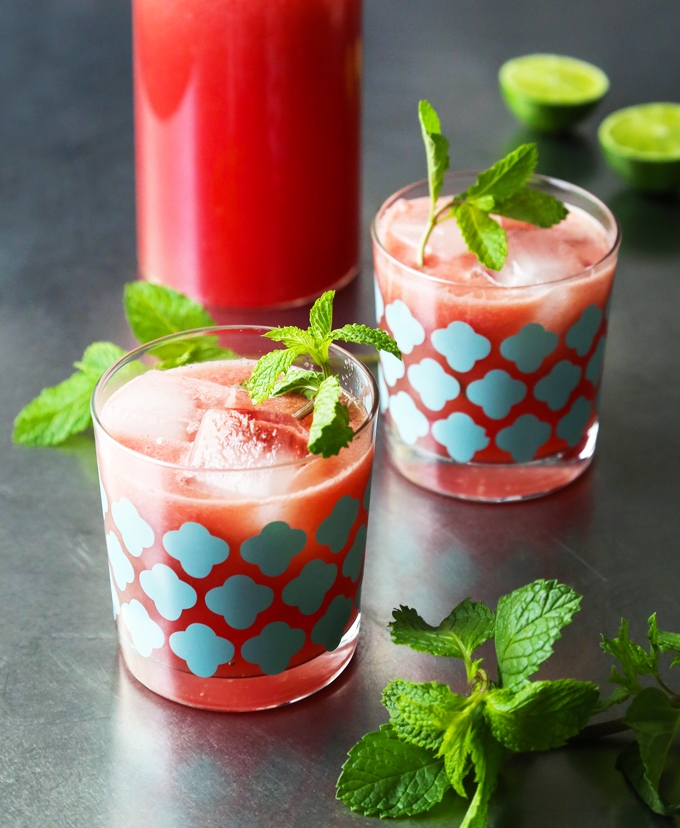 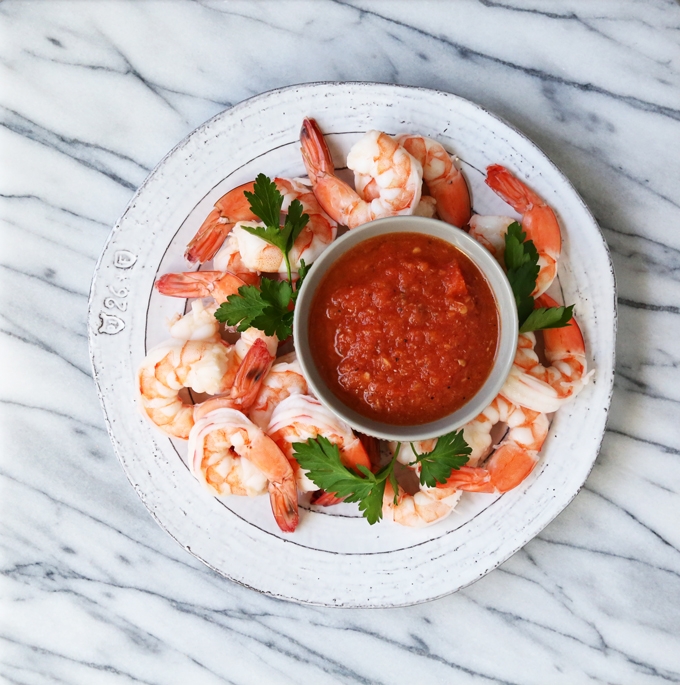 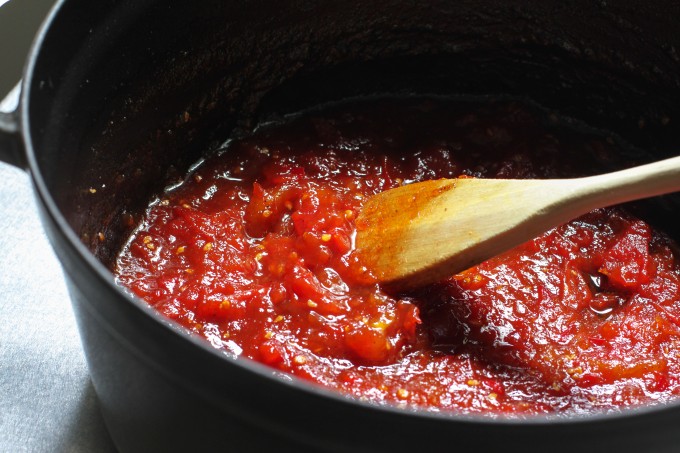 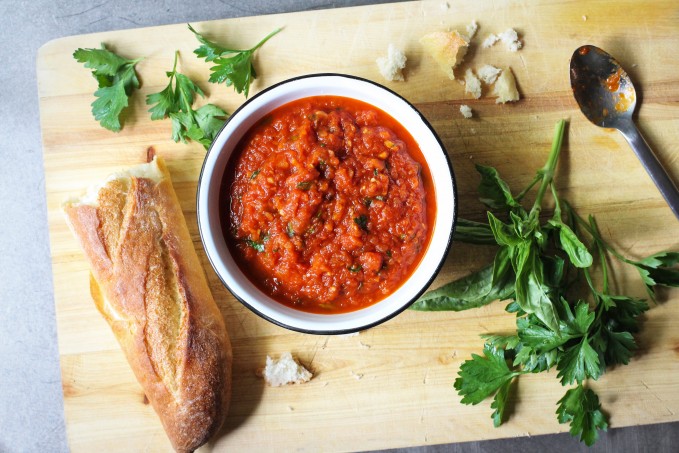