Last year, I discovered Alison Roman’s Spiced Chickpea Stew with Coconut and Turmeric, and I immediately fell in love. Since then, I’ve made a few adjustments of my own, including the use of an Instant Pot. This vegan-friendly stew is perfect for the approaching autumn months, but is also surprisingly tasty even in the summer.

To make this stew, you start by cooking garlic, onion and ginger in coconut oil until tender. Then, you stir in lots of turmeric, red pepper flakes and chickpeas. The original recipe calls for canned chickpeas. Here, I’m using dried chickpeas that have been soaked overnight. Canned chickpeas are such a wonderful convenience item, but I really do love the flavor and texture of soaked chickpeas more. And they cook up just as quickly when you use an Instant Pot!

Once the spices have sizzled a bit in the oil, you add coconut milk and stock, clamp on the lid, and cook under high pressure for just 15 minutes! After pressure releases, you stir in some kale and cook until wilted.

I also deviate from the original recipe when it comes to toppings. I like to ladle up a hot bowl of stew, then top with a spoonful of labneh, cilantro leaves and a sprinkling of toasted coconut and mustard seeds. You guys, this SO delish. Continue reading for the Spiced Chickpea Stew with Coconut and Turmeric recipe.

I love using dried/soaked chickpeas here, because I think they taste better, and they also have a pleasant texture when cooked properly in an Instant Pot. Alison Roman’s original recipe called for two cans of chickpeas, so to get the equivalent from dried, you need to start by soaking two cups of dried chickpeas in water overnight. Next, drain the chickpeas and measure out 500 grams (about 3 cups). Store any leftover chickpeas in the fridge and use for a different recipe!

While the stew is cooking, you can prepare the toppings. Start by toasting some unsweetened coconut flakes in a skillet just until they begin to brown. Then add black mustard seeds and cook until they start to pop. This toasted coconut topping adds some nice crunch to the stew while amping up the coconut flavor.

In addition to the toasted coconut, I love to serve this stew with labneh, a thick and tangy Middle Eastern yogurt, and fresh cilantro. But the beauty of stews like these, is that you can top it with whatever you like. I personally like to add something creamy, crunchy and fresh. Don’t have labneh? Try full fat Greek yogurt or even sour cream. Mustard seeds not in your pantry? Just sprinkle on toasted coconut or chopped, roasted peanuts. Hate cilantro? Use basil or parsley instead! You can really get creative with toppings. 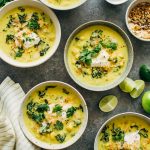