Cacio e Pepe, Italian for cheese and pepper, is a classic pasta dish that originated in Rome. I’ve been making Cacio e Pepe for years, but my love for it was recently rekindled after watching Stanley Tucci’s Searching Italy (how great is that show?).

The beauty of this recipe is that no cream or butter is needed to make the sauce creamy! The heat from the cooking liquid melts the cheese while the starch thickens the sauce.

My version is not 100% traditional, because I like to add some grated Parmesan to the mix. But the method is the same, and the finish pasta is so delish. Continue reading for the recipe.

This Cacio e Pepe recipe requires just 5 ingredients: pasta, extra virgin olive oil, black pepper, Pecorino Romano and Parmesan cheese. Because there are so few ingredients here, you really want to make sure they’re all good quality. Both the cheeses and pepper should be freshly grated, and make sure your olive oil isn’t 10 years old!

I like to grind up hard cheeses in my food processor, and that’s what I’ve used here. This texture doesn’t fully melt into the sauce (you can see just a few bits of cheese in the photos), but the finished sauce is still pretty creamy and I don’t mind the little bits. If you want a 100% silky sauce, then use a microplane to grate your Pecorino and Parmesan.

How to make Cacio e Pepe

To make Cacio e Pepe, you start by cooking bucatini (or a similar pasta shape) in pot of salted water. While the pasta is cooking, you sizzle some ground black pepper in skillet with olive oil until fragrant.

I like to do the mixing with tongs, so I can easily toss and mix as I’m adding cheese. Eventually, a creamy sauce will form that clings to the pasta. Finish by seasoning with salt and pepper.

You may be wondering why this recipe only uses 8 ounces of bucatini? Because the sauce comes together in a skillet, I find it challenging to make a full pound of pasta. If you decide to double the recipe, you may want to try stirring and tossing it all up in a big bowl instead of a skillet. 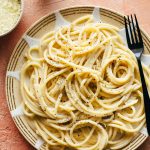