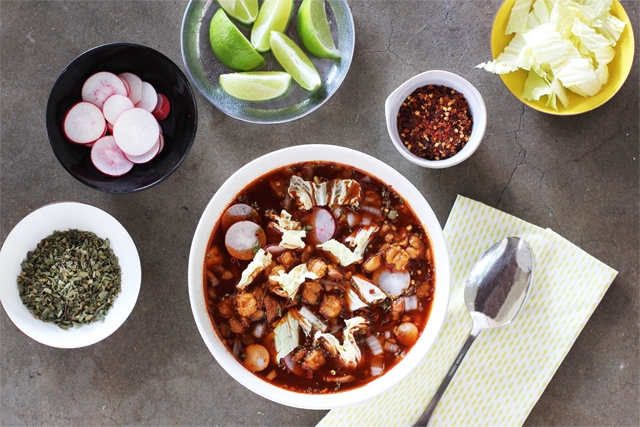 Red Pozole is a flavorful Mexican stew made of pork, ancho chiles and hominy (corn).  Pozole recipes can vary greatly throughout Mexico.  This version is similar to the ones found in central Mexico.  The base of this stew is a slow simmered broth made of pork shanks, trotters and shoulder.  The broth is then added to simmering nixtamal corn with a bold blend of pureed ancho chiles.  The finished stew is hearty, aromatic and so flavorful.  My favorite part?  The toppings.  Served with Red Pozole are these traditional accoutrements: sliced cabbage, chopped onions, crisp radishes, bright lime, fiery red chile flake, dried Mexican oregano and crunchy tostadas.  I just looove the smell of crumbled oregano as it hits the surface of the hot stew.  This recipe may not be quick and easy; however, it is a fun weekend project with amazingly satisfying results.  The recipe below will make a very large quantity of Red Pozole.  Feed an entire party of people or freeze the leftovers for later consumption.  Continue reading for the recipe. 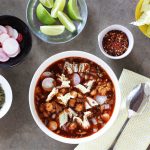 * I was able to find fresh nixtamal corn at a tortilleria in a local Mexican grocery store. If you can't find this, I would recommend getting dried Southwestern pozole corn. This product is readily available online. If you use the dried corn, you will need to simmer it for a longer period of time (approximately 5 hours). Try not to use canned hominy. The texture pales in comparison to the fresh or dried products.

** Ask your butcher to cut the pork shanks, trotters and shoulder into pieces. This is much easier than doing it at home!