You guys, it has been HOT here in San Diego over this past week.  Like rolling black out hot.  So I’ve been grilling almost every dinner, trying to avoid using my oven as much as possible.  These Pork Ribs on the Grill, sponsored by the National Pork Board, have perhaps been the tastiest thing I’ve thrown on the grill all summer long.

When making pork ribs, I would normally wrap them in foil and cook them low and slow in the oven, and then finish them on the grill.  Since I’ve been avoiding my oven, I thought it would be fun to see if I could cook pork ribs 100% on the grill.  Spoiler alert:  It works (and it’s delicious)!

How to cook pork ribs on the grill?

You start by rubbing racks of pork baby back ribs with an aromatic mix of paprika, chile powder, cumin, coriander, cayenne, salt, pepper and brown sugar.  The ribs are then wrapped in foil and cooked covered on the grill over direct medium heat for 1 hour.  I personally prefer using a charcoal grill, but you could easily make these on a gas grill.  The key is to maintain a temperature of 350°F – 400°F within the covered grill.

The ribs are then unwrapped and finished on the grill with the addition of hickory wood chips (optional) and store bought barbecue sauce.  You baste and turn the ribs a few times over 10 – 12 minutes, resulting in saucy, smoky, charred ribs.  So.  Yum.

How long do you cook pork ribs on the grill?

Normally I would recommend using an instant read thermometer to gauge the doneness of meat on the grill; however, that method can be a little tricky with this method.  It’s recommended that pork is done around 145°F, but you need to cook pork ribs to around 190°F to 200°F to really break down fat and collagen, resulting in a tender finished texture.  Also, given that the ribs are wrapped in foil, it’s hard to figure out where to put the thermometer without unwrapping the ribs.

I’ve tested this recipe several times and have found that 1 hour over direct medium heat (charcoal or gas) will give you tender ribs that don’t fall off the bone (that’s a good thing!).  Just make sure you’re maintaining 350°F – 400°F within the covered grill, and the ribs will turn out great every time.

In this recipe, the ribs go back on the grill uncovered for 10 to 12 minutes longer to allow them to soak up hickory smoke and a barbecue sauce baste.  You’re not really cooking the ribs during this phase – just infusing them with flavor.

What’s the difference between spare ribs and baby back ribs?

To make a dry rub for pork ribs, simply mix together paprika, ancho chile powder, cumin, coriander, cayenne, salt, pepper and brown sugar (exact measurements below).  This particular blend of spices enhances the sweetness of the pork ribs while providing some savory balance.  Cayenne pepper adds a spark of heat while ancho chile powder lends some complex sweetness.  Don’t use smoked paprika here, because the ribs will pick up plenty of smoky flavor from the grill.

I would recommend that you dry rub the ribs shortly before cooking them on the grill.  If you dry rub them too far in advance (like hours in advance), you’ll essentially be curing the ribs, and they’ll lose a good amount of moisture.

The last thing I’ll mention is that you want to finish these ribs on the grill with a barbecue sauce  baste.  There are plenty of delicious prepared barbecue sauces at the grocery store, but feel free to use homemade if that’s your thing.  I basted these ribs with a sweeter barbecue sauce, because I thought it would be a nice balance to the smokiness of the grill and the savory notes of the dry rub.  Just be sure to keep some extra sauce on the side for serving! 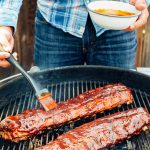 For the dry rub:

*You’ll have enough dry rub for 3 racks of pork baby back ribs. Personally, I could only fit 2 racks of ribs on my grill (with room to breathe), but if your grill can accommodate 3, then go for it!

This is a sponsored post, developed in partnership with the National Pork Board. All thoughts, opinions and recipes are my own.