Get excited. There’s a #VirutalPumpkinParty going on today (with 70+ bloggers!), and I’m bringing these Yeasted Pumpkin Waffles with Candied Ginger to the table. 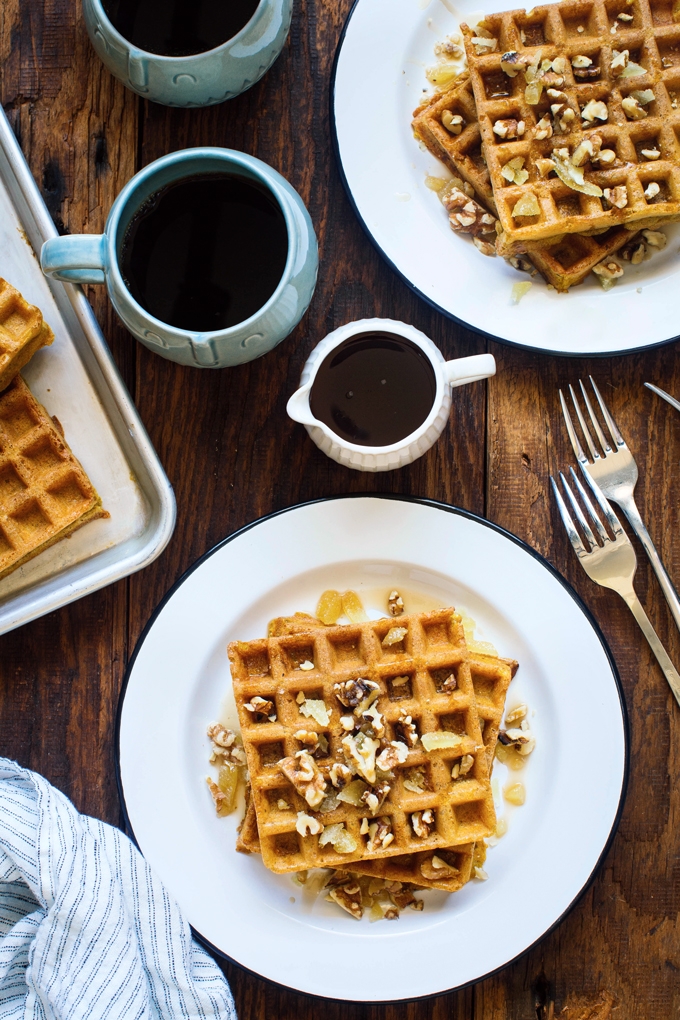 First, let’s talk yeasted waffles, also known as raised or overnight waffles. I’m obsessed. A yeasted waffle is leavened with yeast instead of baking powder/soda, buttermilk or whipped egg whites.  Prepared the night before, the batter bubbles and rises as the yeast consumes sugar.  The finished waffles have a crisp, airy texture with a pleasant, somewhat sour yeast flavor.  Aside from the flavor, what I love most about yeasted waffles is the advanced preparation.  You can do all the heavy lifting the night before, and then crank out a A+ breakfast the next day with minimal effort.

Now, let’s talk about these yeasted waffles.  Flavored with pumpkin puree, brown sugar, cinnamon, nutmeg, clove and ginger, my Yeasted Pumpkin Waffles with Candied Ginger are pure autumn.  I’ve thrown candied ginger into the mix to amp up the ginger flavor in my pumpkin spice blend.  Its mellow burn also adds some intrigue with each bite.  The waffles are finished with maple syrup and toasted walnuts for crunch.  Oh, and the AROMA!!!  You guys, the smells that waft from the iron as the waffles cook are HEAVEN.  Continue reading for the recipe plus all the other #VirtualPumpkinParty goodies. 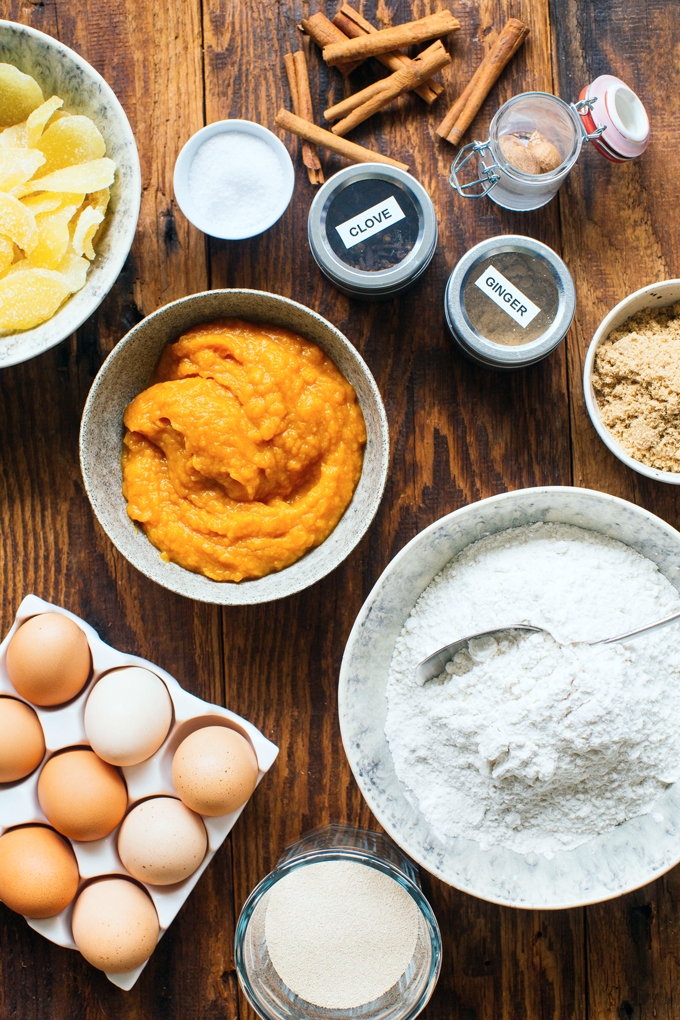 Just this week, I was catching up on the Good Food podcast, and they shared a fascinating interview with Cindy Ott, the author of Pumpkin: The Curious History of an American Icon.  The gist of the interview is that throughout the ages, the pumpkin has always transcended itself.  In the early 19th century, when people started moving from farms into cities, the pumpkin (left behind on the farm) was a nostalgic symbol of farm life and making a living off the land.  Nowadays, you get a similar sense with pumpkin spice.  Pumpkin spice products (often pumpkin-less) bring on a sense of fall.  A sense of coziness.  Something old-fashioned.  As Americans, we often find more value in what the pumpkin represents rather than what the pumpkin actually is. 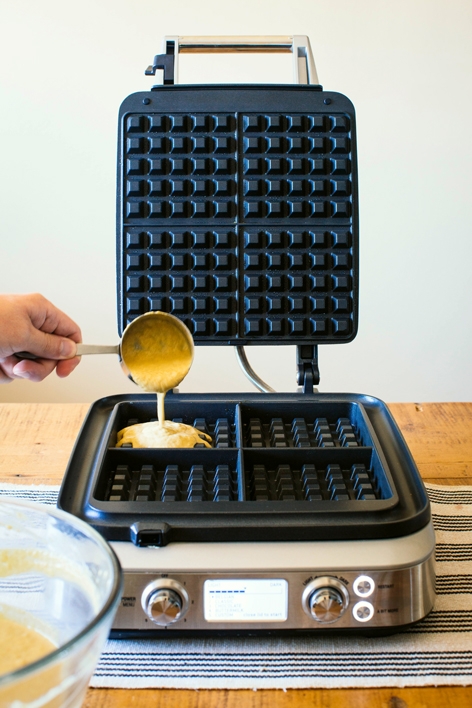 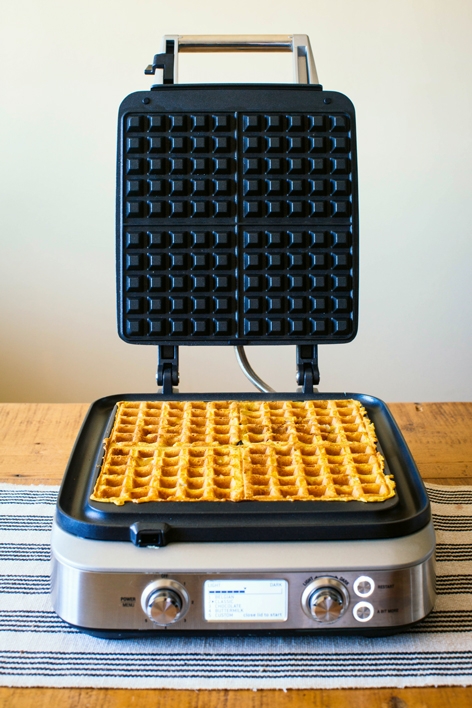 Hopefully, these pumpkin waffles plus the 60+ pumpkin recipes below will help us all love the pumpkin for what it is along with what it represents 🙂 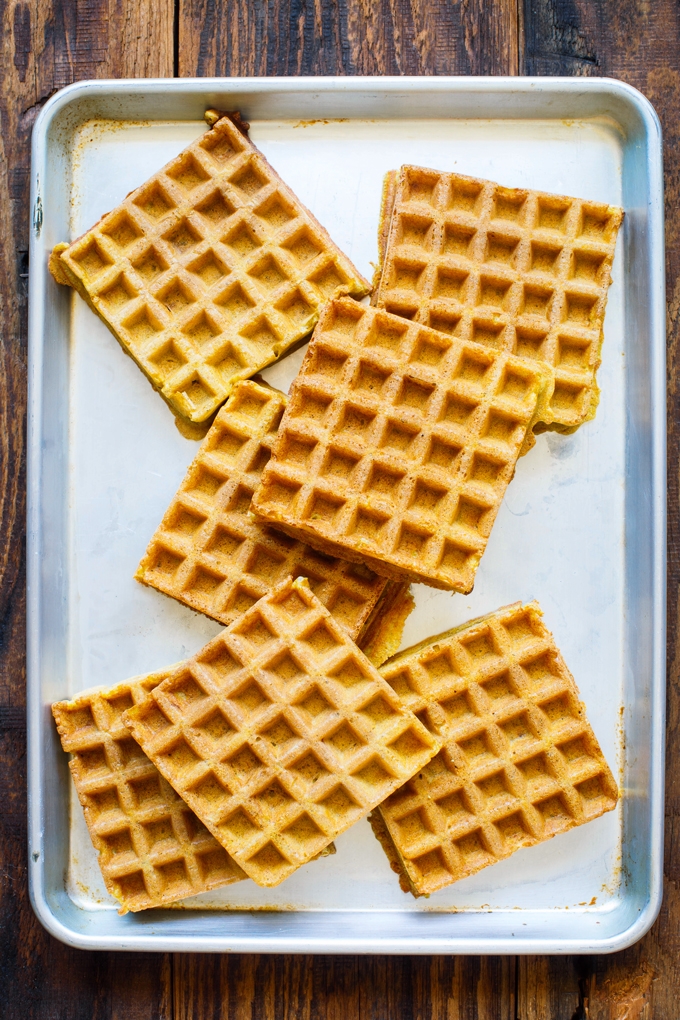 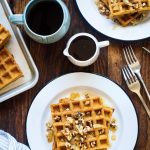 Keep in mind that you need to make this batter the night before you're planning on serving the waffles.
Servings 8 waffles
Author Brandon Matzek

Now take a look at all of the other beauties that showed up to the #VirtualPumpkinParty: