Football season is almost here and I’ve got a mouthwatering Coca-Cola®  and Kimchi Glazed Ribs recipe perfect for a Game Day bash, sponsored by The Coca-Cola Company and SheSpeaks.

To make the glaze, you start by reducing 45 ounces of Coca-Cola® on the stovetop.  The concentrated Coca-Cola® is sweet and bright with an alluring note of vanilla. To this, you add kimchi juice (the liquid the cabbage is fermented in), brown sugar, Dijon mustard, white miso, fish sauce and rice vinegar.  The mixture reduces again until you’ve got a silky barbecue sauce just bursting with flavor. The mustard, miso and fish sauce provide some irresistible umami while the Coca-Cola®, brown sugar and vinegar add brightness and balance.

You make this sauce while you’ve got some ribs cooking in a low oven until tender.  The ribs are then slathered with barbecue sauce, and grilled until glazed and charred in spots.  My Coca-Cola® and Kimchi Glazed Ribs are bold, punchy and perfect to share with friends while watching the game.  Continue reading for the recipe.

I stocked up on Coca-Cola® Mini-Cans at my local Sam’s Club where they’ve got all the beverages you’d ever need for a fall football party, including beer, wine, spirits and plenty of non-alcohol drinks.  One thing I really love at Sam’s Club is their Scan & Go app. I can scan items in my cart as a shop, pay within the app and make my way out of the store without having to wait in any lines!  So. Darn. Convenient.

You’ll need 6 of these mini-cans for this recipe, and the rest of the pack can be put on ice and served at the party.  Coca-Cola® glazed ribs are a classic, but this recipe really takes things to the next level. Coca-Cola® adds a sweet, citrusy note to the glaze with a little bit of vanilla and spice.

Aside from the Coca-Cola®, the other star ingredient here is kimchi.  We eat a lot of kimchi at our house, so I’ve got a 5 gallon container in the fridge.  Any kimchi will work here, just make sure that you purchase a jar that looks like it’s got liquid in it (some packages of kimchi don’t have liquid).

If you don’t get a full cup of kimchi juice from your jar of kimchi, you can also blend up some kimchi until smooth, and use that to make up the difference.  Your finished barbecue sauce won’t be as smooth, but it’ll be just as delicious.

You can make the barbecue sauce and cook the ribs up to one day in advance, so you can focus on other things the day of the party!  I prefer to finish the ribs off on a charcoal grill, but you could also use a gas grill or cook them under a broiler on high.

When you serve these ribs at your next football bash, set up a large platter of ribs with extra sauce on the side.  Scatter garnishes on top to make things look enticing and be sure to have plenty of napkins and ice cold Coca-Cola® nearby! 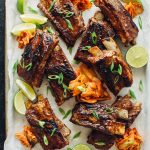 *Kimchi juice is the liquid that’s in the kimchi jar. If you don’t get a full cup of kimchi juice from your jar of kimchi, you can also blend up some kimchi until smooth, and use that to make up the difference. Your finished barbecue sauce won’t be as smooth, but it’ll be just as delicious.

This post has been sponsored by The Coca-Cola® Company and SheSpeaks.  All thoughts, opinions and recipes are my own.